What to do when you’ve tried everything…

I have the psychological addiction to smoking in the worst kind of way.  I’m working crazy hard to finish my Master’s Degree and I can’t even think of stopping until I finish in January.  Then I really have to learn to deal with this problem.  I hope it’s not too late. I’m sixty-seven years old and have been smoking off and on all my life.  It really makes me feel horrible and I want to live the rest of my life in as good health as possible. What make The Complete Quit System different than everything else I’ve tried?  And, believe me, I’ve tried everything.

You sound exactly like me several years ago – I had tried ‘everything’ to quit, with no success.  I was starting to despair that I would ever be able to quit, and I didn’t know what to do next.  I was starting to think I was going to die a smoker… and probably sooner rather than later!

So first, let me reassure you that it is not too late.

It doesn’t matter how old you are, or how long you have been smoking – you CAN quit, and it will vastly improve your health and your life.

I know of at least one woman who was 70+ years old, who had been smoking for more than 50 years, and was up to five packs a day when she used this program to quit.  If she can do it, you can, too.

Second, you mention that you are psychologically addicted.  Knowing that, I can tell you that most of the things you have tried didn’t really have much of a chance to help you quit.  Why?  Because most things on the market deal mainly with the physical addiction to nicotine, not the psychological dependence on smoking.

It’s the psychological addiction that keeps you coming back to smoking, even if you’ve quit for several days, weeks, months, or sometimes even years.

So the short answer about what makes The Complete Quit System different from what you’ve tried is that it focuses almost exclusively on the psychological addiction.  Of course, it does deal with the physical addiction too, with a simple and natural nicotine fading technique, similar to what is used for ‘harder’ drugs.

This is the exact opposite of most methods, which focus primarily on the physical addiction to nicotine, with little or no attention paid to the main problem – the psychological dependence.

The longer answer to ‘what makes this program different’ involves a psychological breakthrough that changed our entire understanding of how people think.

A little more than 10 years ago, psychologists found conclusive evidence for the existence of two cognitive systems in the brain.  These two systems work very differently: One functions according to strict rules of logic, while the other one works to assimilate our experience using rules of association.  Prior to this discovery, we tended to think about ‘rational’ vs. ‘irrational’ thought, believing that rational thought was good, and irrational thought was simply erroneous thinking, to be avoided at all costs.

Now we know that our ways of thinking can more accurately be categorized as rational and experiential.  More importantly, we now recognize that experiential thinking also follows a set of predictable rules – they’re just different from the logical structures followed by the rational system.

So how does this relate to trying to quit smoking?

Many methods for quitting – even those that try to focus on the psychological aspects – focus on the WRONG cognitive system.

For instance, programs that simply have you write down reasons to quit, or that educate you about all the diseases you’ll get if you keep smoking are essentially focusing on the rational reasons you should quit smoking.

You already know this doesn’t work to help you quit smoking, don’t you?  The reason it doesn’t work is because these strategies focus on the rational cognitive system, but your desire to smoke is controlled by your experiential system.

Some people are able to quit this way, if they have a whole bunch of will power.  But the problem is, you can’t get rid of your desire to smoke by influencing only your rational system.

Think about it:  If it were up to your rational system, you’d have quit a long time ago, right?  Or more likely, you would never have started in the first place…

The truth is, to get rid of your desire to smoke, you have to influence your experiential system, too.

And that’s the second thing that makes my program different:  As far as I know, it is the only quit smoking program in the world that focuses on influencing the experiential system in order to get rid of the desire to smoke.

Without actually knowing about everything you’ve tried, it’s hard to know which of these other elements are different, but here are some things that I think make my program uniquely helpful to folks: 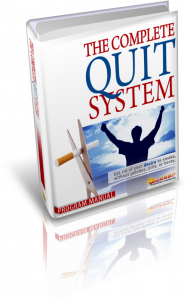 It’s a step-by-step program, not ‘advice’ about how to quit.

The program manual tells you exactly what to do to prepare before you even start to quit.  On Day 1 of the program, you are approximately two weeks from quit day.  The manual tells you what to smoke, when to smoke, and how to smoke between days 1-5, Days 6-10, and Days 11-15.

Day 16 is your first smoke-free day – and it will be nothing like quitting cold turkey.  You’ll be prepared for it, virtually free from nicotine addiction already, and most of the way through any withdrawal symptoms you might experience, before you actually quit smoking.

You also learn what to do after you quit.

Days 16-20 you get explicit guidance about how to care for yourself after you quit, including how to avoid weight gain and how to get closure around smoking.  Days 21-25, you find out how to deal with problem areas like friends who still smoke.  Days 26-30 you begin the process of ‘reinventing’ yourself to become more of who you are, only better.

Along the way you’ll use principles of classical and operant conditioning to eliminate the power of smoking ‘triggers,’ you’ll discover how to proceed through the grief process and avoid getting trapped in the stages of anger or depression, and you’ll learn techniques to ‘inoculate’ yourself against the risks of going back to smoking later.

The Complete Quit System has everything you need to quit successfully – including a money back guarantee, for your peace of mind.

OK, now for one caveat:

This program works about as well as that treadmill (elliptical runner, gym membership, etc.) that you bought yourself around New Year’s last year.  If you get on it and DO it, it will work for you.  If you don’t, it will sit there taunting you, like that treadmill…

If you still believe there might be a magic pill out there for you, you’d better keep looking.  But if you’ve decided you really do want to quit, and you’re willing to devote a few weeks to earn a lifetime of freedom, then by all means, hop on.

If you’re ready to quit smoking, I really can help you.  But you have to take the next step.

Take the Next Step

Previous post: I’m an emotional wreck when I quit. What can I do?